So the new star wars movie came out as almost everyone knows. I found the movie enjoyable and really liked the new characters. I also enjoyed that even though the expanded universe is no longer canon, Disney took some ideas from it and used it in the new movie and I hope they continue to do so for later movies.

I'm wondering what you people thought of the movie as a star wars movie and just a regular movie.

I saw it last night and didn't really like it. I think I mostly just didn't like the new characters, and I was hoping they might make it a bit less black and white morally. I thought the CG was great, but

Spoiler:
didn't like how Rey became an expert almost instantly, doing seemingly high level force things like mind tricks with no training. I also thought the amount of plot armor was ridiculous when Chewie shot Kylo Ren with his bowcaster, which killed multiple stormtroopers earlier by hitting the ground a few feet from them, but Kylo Ren just shrugged it off.

I loved it, there was a lot of cheese and it was basically a retelling of episode 4, but the film is essentially a soft reboot of the series, so they had to cover familiar before they could push it any further, and the director of the next film is great.

Spoiler:
a bowcaster bolt is a physical metal bolt surrounded by an energy bolt, which is why it punches harder than a blaster, Kylo had already been shown in the film to be able to use the force to stop a blaster bolt using the force, I dont think its going to far to think that he had time to slow down the bolt to make it hit less hard, since he wasnt able to stop it outright.

Luke didn't have much more training than Rey before showing the ability to use the force to do most of the things she did, only a couple hours on the falcon with Obi-Wan. Rey is more than likely Luke's daughter. the only thing she did that luke didn't do before training with yoda is a jedi mind trick, and that doesnt seem to me like a particularly high level skill considering its just influence over someone else's weak will.

the high level jedi stuff has never actually been demonstrated in the films, since at the time of the prequals the jedi order was losing its connection to the force and their ability to use it was diminished... people seem to forget that plot point from the prequals.

the only character traits that bugged me with finn were how his motivation to leave the first order was that he didn't want to kill... but to do so he kills hundreds of his friends and former collueges. I loved Kylo being a dorky vader wannabe that had temper tantrums

yes, whomever did the animation/puppeteering on BB-8 did a fantastic job. I havnt seen that much expression from an inantimate character since... well... R2D2

Rey was great, mostly.
Finn was awesome.
BB-08 was a lot less annoying than I thought he was going to be.
Kylo Ren has great potential, and the scene where he confronted his father is one of the best scenes in all of Star Wars.

My problem with The Force Awakens is that there is a great plot in there, yearning to break free, but it's buried under so many callbacks and homages to the original trilogy. I came twice in the first half hour. 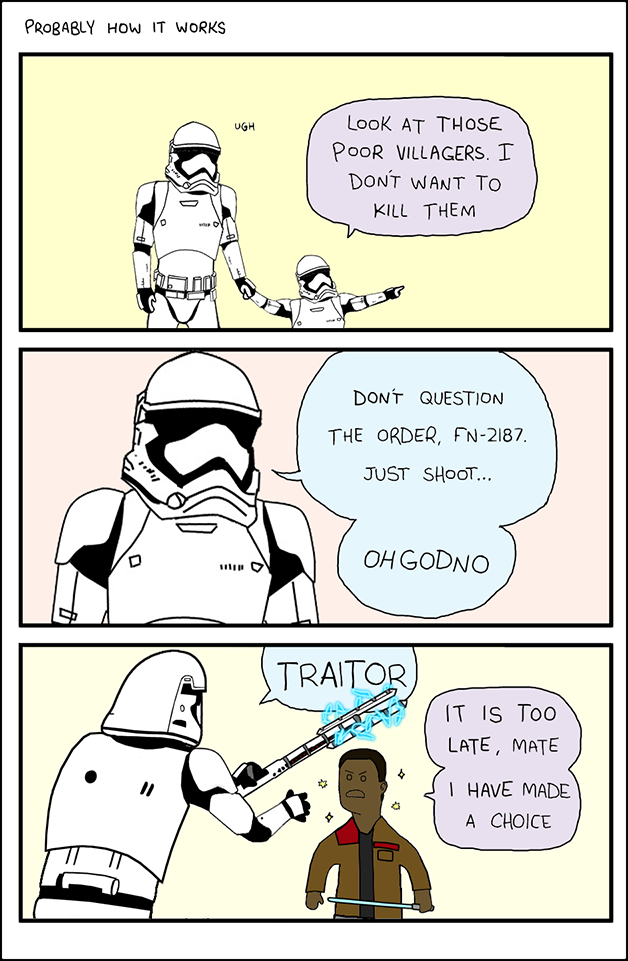 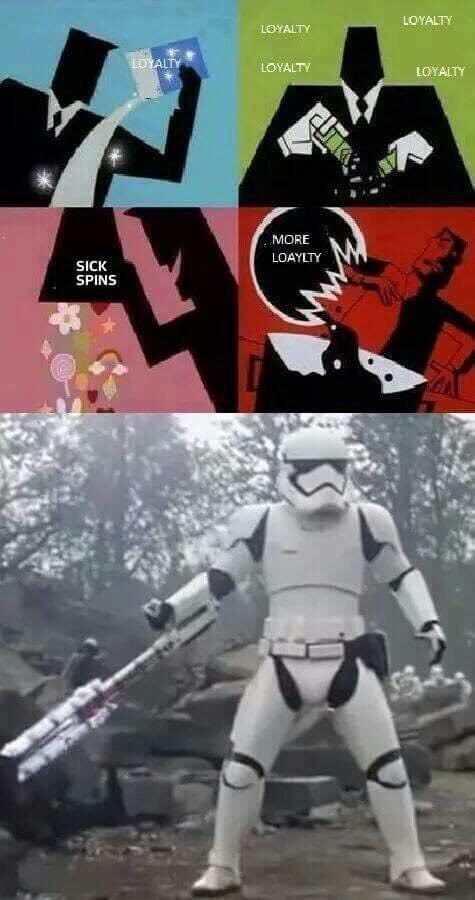 2nd time was even better. there are some really weird story beats, but the film is equal with jedi in how much I like it

Yes. It was definitely improved on the second viewing. Gotta admit, it helped that I was in a theater with decent sound equipment, so I could actually understand all of the dialog.

Also, second time around lets you catch foreshadowing and story beats, like when Rey mentions the sinking sands that Po crashes into a few scenes later.

The callbacks don't seem as glaring now, and I think the movie is going to be much improved if the sequels flesh out who the First Order characters are instead of keeping them as mere imitations of Emperor Palpatine and Grand Moff Tarkin.

This movie honestly bored the shit out of me. Kylo was probably the most annoying villains I have seen in awhile.

Ascendant Justice wrote:This movie honestly bored the shit out of me.  Kylo was probably the most annoying villains I have seen in awhile.

I believe that his character was meant to be that way. An arrogant asshole who had the raw talent and let it go to his head. While I didn't find the movie boring I can understand why you would feel that way.