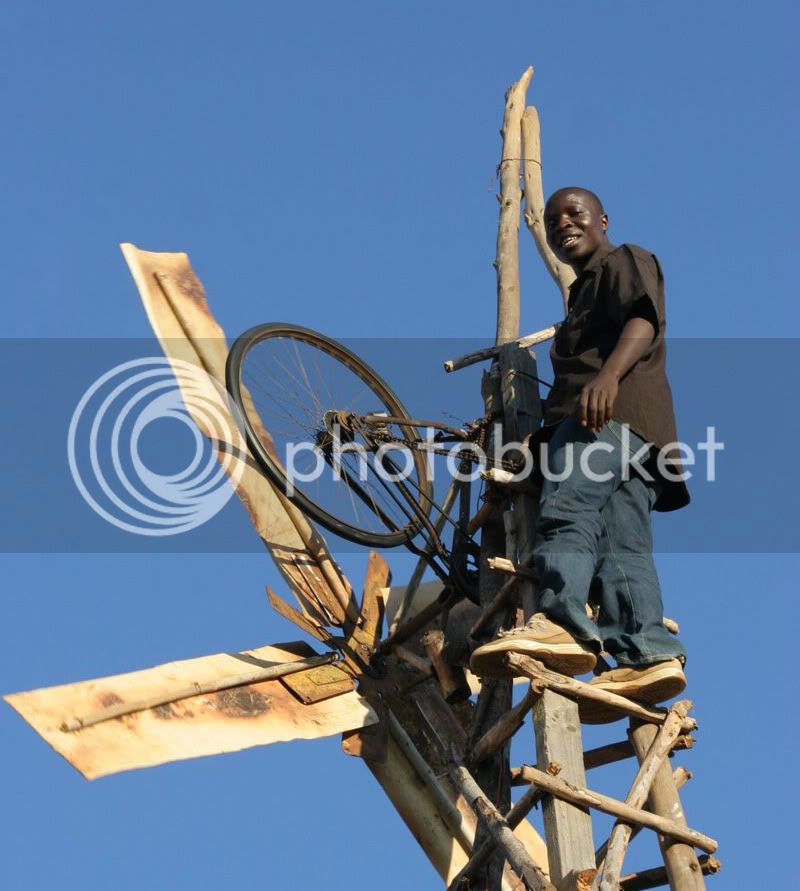 William decided an electric windmill was something he wanted to make. Illuminating his house and the other houses in his village would mean that people could read at night after work. A windmill to pump water would mean that they could grow two crops a year rather than one, grow vegetable gardens, and not have to spend two hours a day hauling water. "A windmill meant more than just power," he wrote, "it was freedom."
William scoured trash bins and junkyards for materials he could use to build his windmill. With only a couple of wrenches at his disposal, and unable to afford even nuts and bolts, he collected things that most people would consider garbage-slime-clogged plastic pipes, a broken bicycle, a discarded tractor fan-and assembled them into a wind-powered dynamo. For a soldering iron, he used a stiff piece of wire heated in a fire. A bent bicycle spoke served as a size adapter for his wrenches.
After completing his first windmill, William "went on to wire his house with four light bulbs and two radios, installing switches made from rubber sandals, and scratch-building a circuit breaker to keep the thatch roof of his house from catching fire." His project had the attention of village locals early on, but at this point he gained the attention of TED, Technology Entertainment Design, through whom he was introduced to individuals willing to contribute to his plans to "electrify, irrigate, and educate his village, as well as pay his tuition at the prestigious African Leadership Academy in Johannesburg."
In short: A young man struggled to educate himself, to build something his village needed, and in the end made a difference to the entire locale and gained the education he'd always wanted. And so, William moved to California to take up residence with his aunt and uncle.

Achivement Unlocked: DID SOMETHING KOOL! - 100 G's

+1 internetz to whom that get's it first.

lol well he did leave his village behind.

and 2, how the fuck did he use the windmill for electricity? that tech is complicated.

its not like he built the motor / alternator itself... he probably just salvaged an old one, hooked it up so that its spun with the windmill... then its just a matter of hooking it up to a battery

William moved to California to take up residence with his aunt and uncle.

Dud Doodoo wrote:+1 internetz to whom that get's it first.

He left them all for California lol

Dud Doodoo wrote:+1 internetz to whom that get's it first.

So this is the story all about how, my life got flipped, turned upside down...

So, is this a real story with a joke at the end? If it is, then this is the sort of spirit we need to capture and instill into all young Americans.

KristallNacht wrote:lol well he did leave his village behind.

and 2, how the fuck did he use the windmill for electricity? that tech is complicated.

Its really not that complicated. Its pretty easy to do alot of things actually. And as someone else stated, you can generate electricity using a motor.
_________________
I AM THE LAW

Im gonna go with the "I left my village behind for Californiat so they can attempt to fix this contraption when it breaks" theory for 300 please.