If I wasn't going to be an engineer, I would have been a machinist. It'd be more specialized than the assembly-line work you see above, but I'd still be working with some neat machinery.

that is pretty sweet

Metalwork is cool shit, but it always gets me thinking: how did we ever actually get to metal in the first place? Just... throw a rock with some ore in it in a fire? Seems weird.

copper can be found as actual chunks, it isnt like iron where you have to melt down rocks to access it. Native copper is what it is called.

other native metals are gold, silver, platinum, and sometimes iron (though native iron is usually from meteorites and are alloy's) probably more

so they used native metals for tools and stuff, probably eventually figured out you could melt and re-cast metals/ make alloys... once they had hot enough fire to do that all it would take is some accidental putting of some iron-bearing material to end up with iron, and we know that took a while for people to figure out.

We didn't really turn to iron smelting until tin, an important component of bronze, became scarce. By the time tin became common again, even though bronze was generally a better material at the time, iron production had become so cheap that we just stuck with it.

yeah, there is a misconception that people didnt use metal tools in the stone age, and that nobody used iron in the bronze age... ext


the bronze age isnt the first use of bronze, its just when it was widespread and used for mass production.


imagine being the one badass with an iron sword made from native iron during the bronze age, that would be awesome

Crap. There was this one tribe in Mesopotamia, small one, that managed to climb its way to the top because it was sitting on a lode of native iron, when everyone else was using bronze. Can't remember who.

Also, you think Vikings are awesome? Their iron was sourced from peat bogs, of all places. Bacteria would produce hydrogen sulfide, which would bind to iron and eventually create these clumps and nodules that could be harvested and refined.

From what I've read, bronze is generally regarded as a better material than native iron and even smelted iron, at least for the purpose of weaponsmithing, because it is harder than native iron and so holds an edge better. The big reason we stuck to iron after tin became less scarce was because iron was even more common and super cheap to produce with. And then we figured out how to make steel, and bronze was done.

That said, in the bronze age, native iron was exceedingly rare, and meteoric native iron often had religious significance, having seemingly been sent by the gods, which was why native iron weapons were often highly regarded in those times, even if they actually weren't functionally superior to bronze weapons of the same design. Sort of like how aluminum was once considered more valuable than gold until we figured out how to properly smelt it.
_________________

And yet none hold a candle to the might of Valyrian Steel.

Lord Pheonix wrote:And yet none hold a candle to the might of Valyrian Steel.

Damascus Steel is pretty cool though, the knowledge on how to forge it has been lost to time. One of my favorite sayings.

Are there any weapons left that still have Damascus Steel?

Rotaretilbo wrote:Oh yes, we have quite a collection of them in various museums. We just can't figure out how they were made. 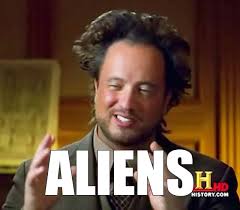 Rotaretilbo wrote:Oh yes, we have quite a collection of them in various museums. We just can't figure out how they were made.

Meh. It's just a combination of traditional pattern-welding and obscure (Likely depleted) materials.