I suck at drawing. Really.
And I don't have the patience to sit down with pen and pencil to make something look really good, unless I'm drafting something.
What I am is an engineer. An engineer with nearly unlimited access to Solidworks Design Studio.

And without further ado, I present the Department of Commercial Shipping Automated Cargo Ship from Contact Harvest. 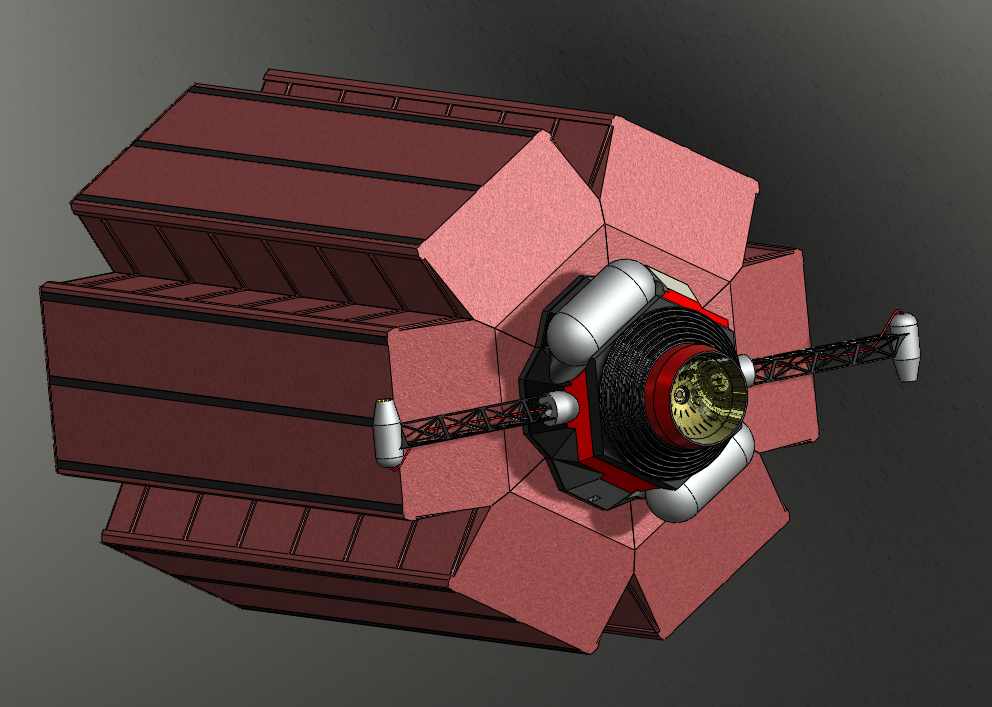 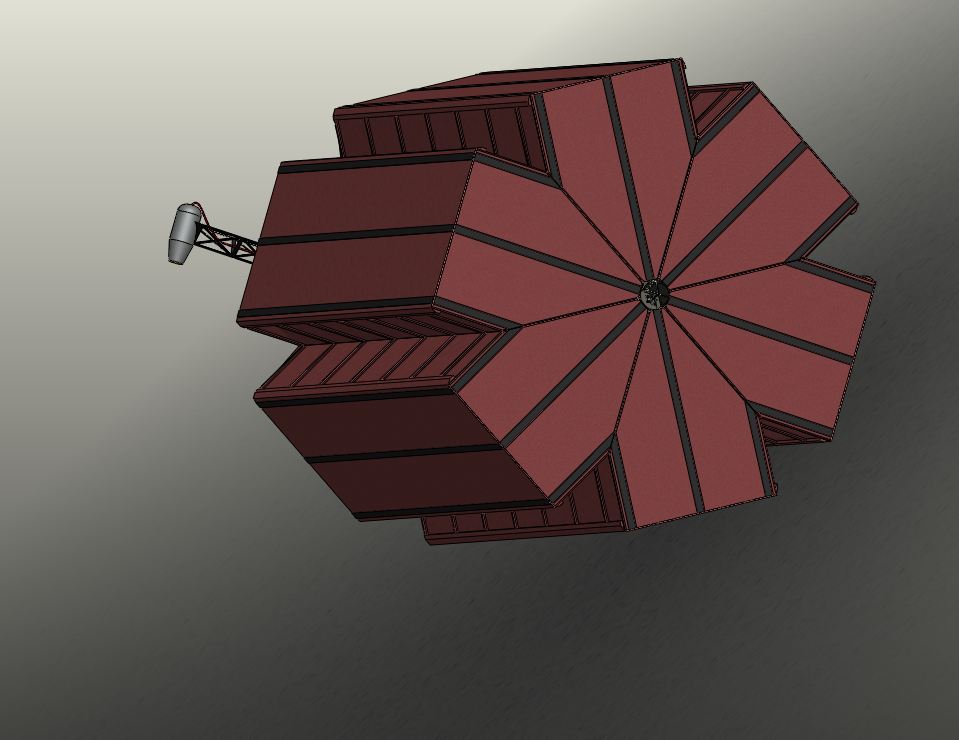 She may not look like much, but she's got it where it counts, kid.

The Aerogroup-International MT-3400 has seen continuous service since the DCS purchased 500 in 2432. The slipspace drive and the reactor were built by Solar Dynamics and General Electric, respectively. The whole unit is simple, rugged, and can run forever if it is given proper maintenance. 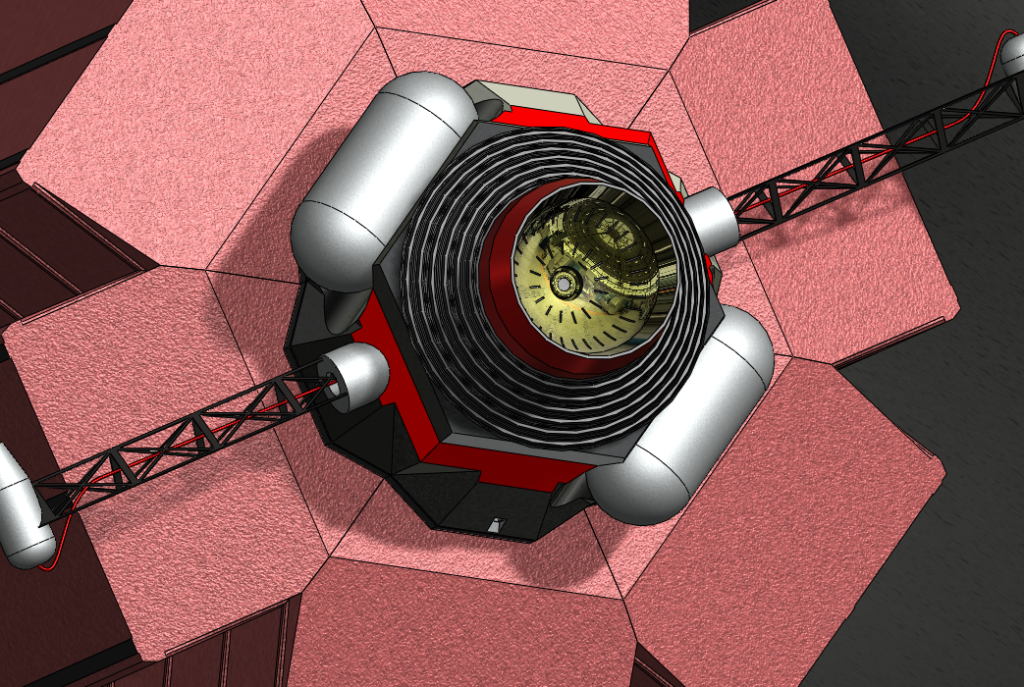 Above, we can see the Propulsion Pod. Note the massive hydrazine fuel tanks and the maneuvering jets. For scale, that little divot in the lower middle of the picture is an airlock.

The rings around the rocket nozzle are radiator fins. They often have to work overtime to keep the propulsion pod cool, and are frequently replaced due to damage from space debris. A more complicated system was tried, but was prone to breaking (And crashing my computer)

The maneuvering jets are mounted on a tower that can rotate 180 degrees about the long axis. In this position, the jets are either spinning the ship up to full gravity or are slowing it down.
For those of you who are worried about the exposed fuel lines, it would appear that some lazy mechanic has removed them and failed to re-install them after he was done working.

But why hydrazine, you ask? Why on Earth would Aerogroup-International (or Statten) choose to fuel these ships with a fuel that is toxic and falling out of use?
Well, Hydrazine is cheap to manufacture in those outer colonies, but better yet, it can be run through a fuel cell to power the ship if the reactor ever fails. Engineers just love that kind of dual use. 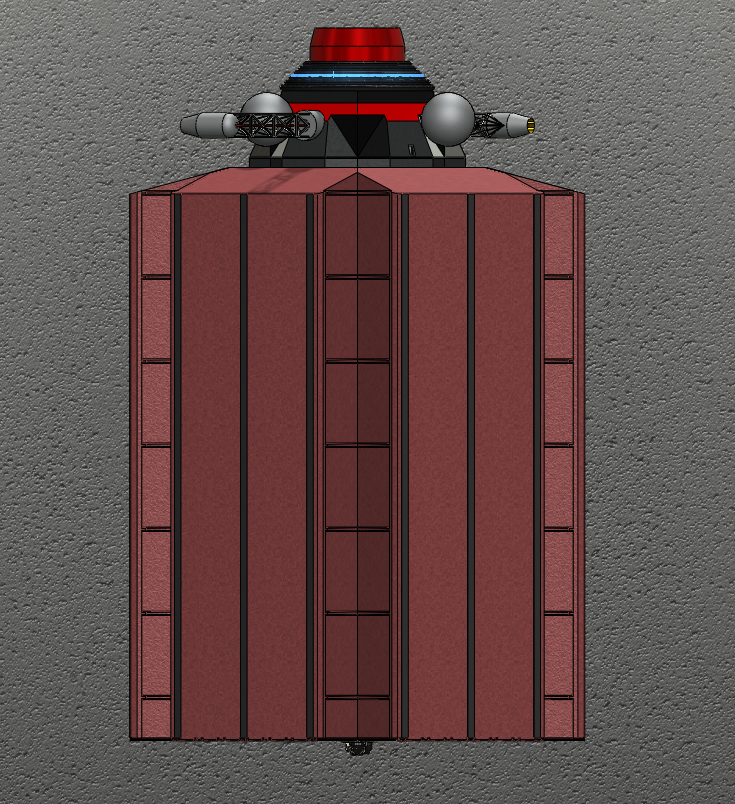 Here we have a better look at the scale of the propulsion pods and the cargo containers. As you can see, the pod is quite the little workhorse.

The mottled red surface is ballistic foam which protects the cargo containers from debris and micrometeorites. It also comes in orange, blue, crimson, green, yellow, brown, powder blue, white, ivory, lilly, and a light creamy color that is definitely not another shade of white. 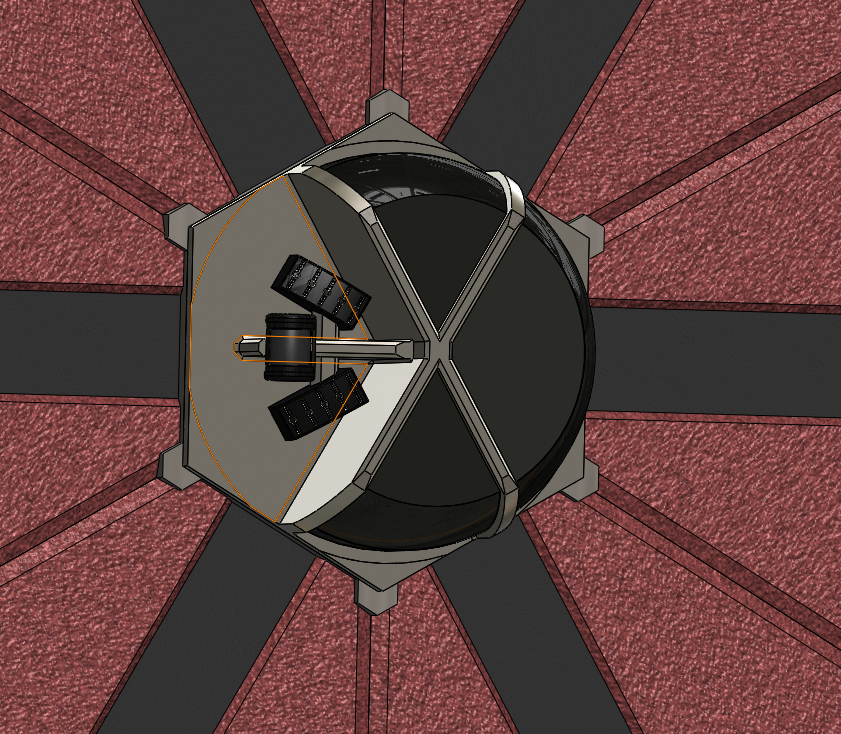 The sensor module at the front of the ship contains a MASER and receivers. The protective covering has been removed from the MASER for illustration. 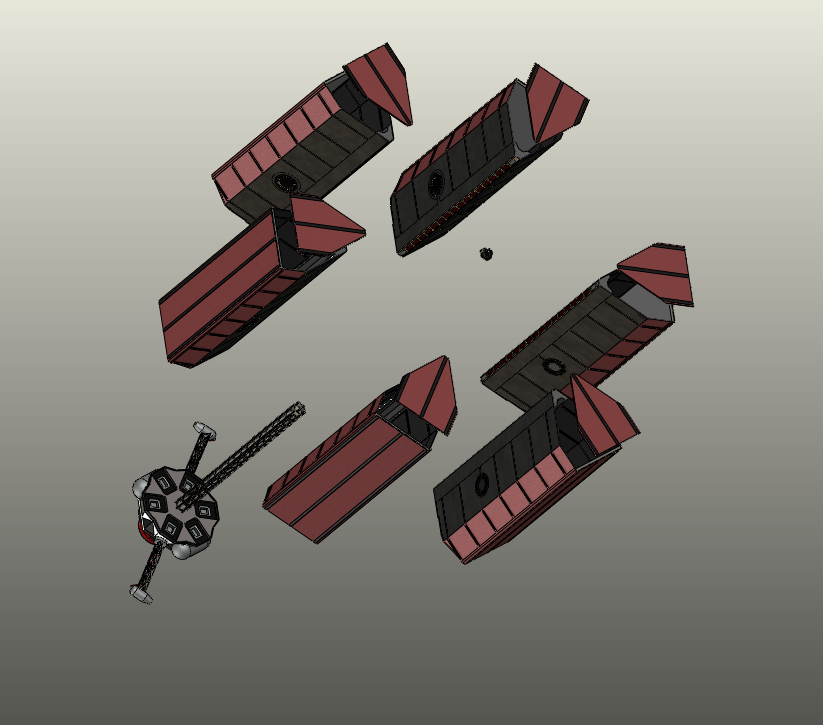 See the rings on the barn roofs? Those are magnetic clamps, which hold them together... just about all the time. Quite often, the barns are dropped down a space elevator as a sextet, and are only broken up on the ground.

This also makes it difficult for pirates, who have to match velocities and dock with a rotating ship. Some prefer to hack into the ship and get it to stop, some disable the magnetic clamps and chase down the cargo containers, and some (Like Jackals) just select a random container and blast it until the whole ship stops rotating.

Because of the value Insurrectionists put in the slipspace drive, many pirates are after the propulsion pod itself. The pod is automated with only a simple computer, so many attempt to hack it at the dock and send it to Insurrectionist hideouts. Fortunately, each dock is equipped with a CMA-registered smart AI who are on the lookout for such tampering.

The first successful hijack from the dock was performed by Kaiser Sergei, who introduced a viral subroutine into hundreds of DCS ships while posing as a CMA technician.
Seeing as how he did this on Harvest in December of 2524, his haul was understandably limited, on the order of half a dozen ships. 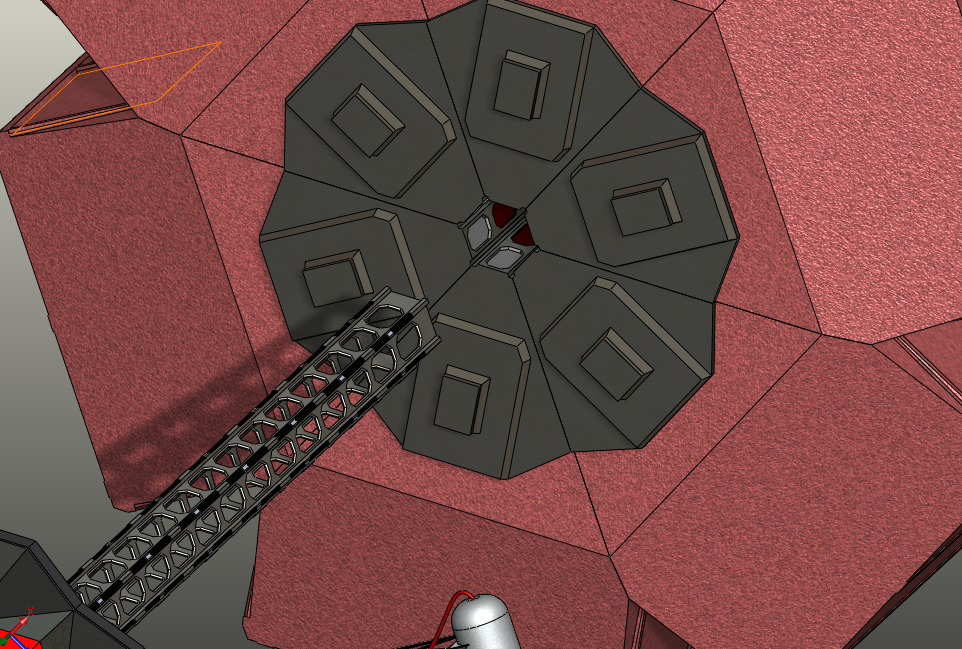 And here we get another look as to how they go together. If you look closely at the corners of the elevator, you'll see the electromagnets that secure the propulsion pod to the cargo containers.
If the cargo containers had any modules like a heating/refrigeration unit or an atmosphere processor, the large extrusions would have sockets to draw power from the propulsion pod. Since these are bog-standard barns, they only draw power along the spine. 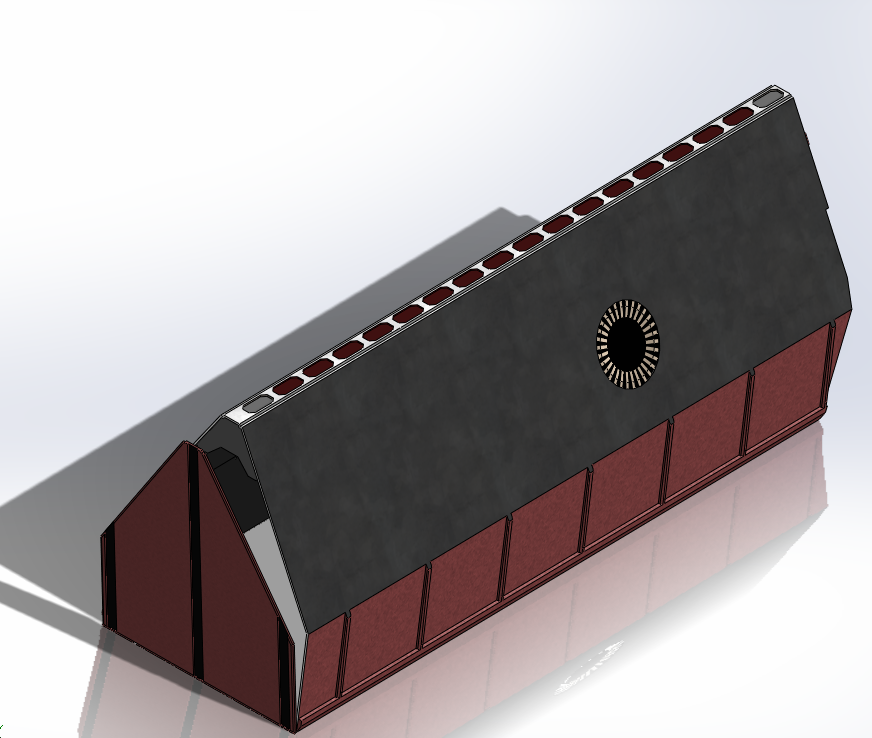 The containers have a control cabin that can be accessed via the elevator, which runs along the hull of the containers. The red indents are access panels that allow a mechanic to work on the electronics in the spine of the container.

But what does the inside look like?
You'll have to find out later!