Which of the two candidates do you favor (or hate least)?

Since this somehow doesn't have a thread and the first of the official debates just ended, would anyone care to share their thoughts on this years presidential race?

I'm sure most of you will agree with me that this is, yet again, a choice between the lesser of two evils; this is only made more apparent by the excessive mud-slinging which NEITHER of them will take responsibility for (go figure). I'm also sure most of you can guess that I'll be voting for Romney this year but even though he's far from my first pick as president, I've actually become quite fond of his VP pick, Ryan.

If a Rich man has a choice between cutting taxes for the rich to give himself more money or helping out the less fortunate and taxing the rich to help the poor, he will choose to make his own bank account larger every time.


I do not trust a rich man to run a country, they are far to invested in their own wallet and their own interest to help the little man out over themselves. Not the kind of man you want looking out for you.
_________________

I'm not sure if you've noticed, but everyone in Washington is rich. Both have said they are against lowering taxes on the rich, though. They're also both trying to limit tax exemptions and simplify the tax base to prevent tax evasion.
_________________

And I don't trust any of the rich in Washington either.

I don't trust politicians period, but the rich ones especially.

What is the reason for a politician to be labeled corrupt? Because they go against the interest of the people for money.

The people that already have money? They will do everything they can to get more money and keep what they have.


I understand that, but it has no place in politics.

Plus i'm pretty sure Mitt Romney hasn't actually backed up any of the things he's saying. It's pretty much gone:


Romney: "I'm going to fix the economy with my new plan"

Everyone: "Can we see this plan"

Romney: "Oh there is a plan, don't worry about it"

Everyone: "can we please see this plan so you aren't just spouting good words about how you are going to fix it without anyone being able to dispute your claims since you haven't shown facts about it?"

He said in the debate that he doesn't want to disclose the details of any plan because he wants to sit down with congressional leaders before trying to push something through congress. He has mentioned a number of core ideas he would like to implement, though.
_________________

He can still give out his current plan and say it is open to be changed on points but going into a debate against a man who's plan has been in place for 4 years and has shown exactly what he will do for the next four years and then asked about what his plan is says "nuh uh, you can't see it yet. it's not ready. But here is why YOUR'S sucks and here is what the part I haven't shown you says" is just a shit way to debate.
_________________

I had to add my option

The only plan Romney hasn't released all the details on is the healthcare plan, but how could it possibly be worse than what we have now?

And if he had a full bill for you to read right now, would you? No, the only people who would read it would be his opposition so they can nit-pick at parts which are irrelevant. It makes no sense for Romney to paint a target on his back for a few details that aren't important to his goals. He said he is going to meet with congressional leaders to hammer out a genuine, quality bill and that's exactly what I want.

I don't want a 2000-page abomination which nobody read, infringes on states rights, and was passed without a single vote from the opposing ideology. Especially one that increases taxes and substantially increases the influence of the federal government.

We need a carefully designed plan which everyone can agree on and the best way to do that is to come to the table with important goals and idea, not the party-line garbage we've been getting so far.

Lets put it plain I dont even know who Krazy's Candidate is and I'd vote for him over Romney or Obama.

Hell if Chancellor Palpatine was on the Ballet I'd vote for him instead.

dragoon9105 wrote:Lets put it plain I dont even know who Krazy's Candidate is and I'd vote for him over Romney or Obama.

Hell if Chancellor Palpatine was on the Ballet I'd vote for him instead.

I've looked at the issues, and while I was initially very reserved, I think I'll probably be voting for Romney. I just have to give enough fucks to research it more thoroughly.
_________________

Mitt Romney is the worst choice for president.

Of all the things you could call Romney, I hardly think "racist" is one of them. And like I said before, they're all rich. At least Romney made most of his money from business rather than politics and inheritance.
_________________

Dirty business if what is said about him is true.

CivBase wrote:Of all the things you could call Romney, I hardly think "racist" is one of them.


Well he is a Rich White Republican Mormon who grew in the sixties and said that "at least no ones asked me about MY birth certificate" when talking about Obama. That is the ingredients for a racist.

Also when he went to speak to Latinos in Los Angeles he got a spray on tan to try to appeal to the Latinos. 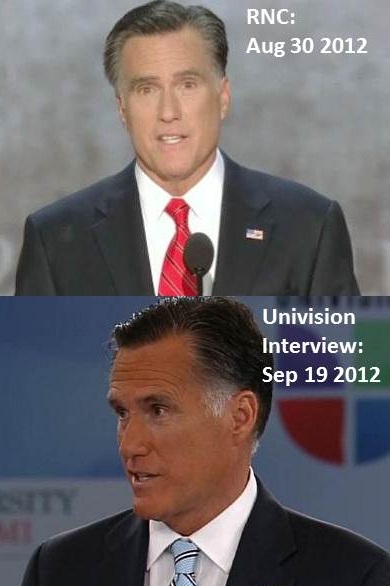 Ignoring the fact that by reducing the investment tax, people are more likely to invest, which not only promotes more jobs, but also results in higher federal revenue, right?

Gauz wrote:Dirty business if what is said about him is true.

I hope we're not talking about the tax thing, because that's really dumb. Almost all of Romney's earnings come from long-term investment, which has a lower rate than income tax.

Can you link a source? I can't find anyone who even gives a ballpark estimate of Romney's plans to increase defense spending.

Lord Pheonix wrote:Well he is a Rich White Republican Mormon who grew in the sixties and said that "at least no ones asked me about MY birth certificate" when talking about Obama. That is the ingredients for a racist.

You mean in reference to the hullabaloo both sides made about one another's birth certificates last election? Because as I recall, there was a lot of rabble rabble about McCain being born in Panama back when we still owned the Panama canal, and last I checked, McCain is a rich white Republican Christian who grew up in the sixties.
_________________

Chances are even higher of McCain being a racist honestly.

Like when he blamed the California Wild Fires on illegal immigrants and said it's even more reason to secure the border despite no evidence backing him up at all.
_________________

I'm hearing a lot of un-cited claims in this thread.

McCain said border-crossers have set fires "because they want to signal others. They set fires to keep warm and they have set fires in order to divert law enforcement agents and agencies from them. The answer to that part of the problem is to get a secure border."

And Mitt Romney getting a spray on tan before going on to speak to Latino's to gain there vote?


I don't even know what to say about that. That is just fucking stupid.

McCain blamed a handful of Arizona wild fires on illegal immigrants, in the case of that quote, referring to fires in the Coronado National Forest. And considering that they do start some of fires, he wasn't exactly off base.
_________________

I just saw "wildfire" and thought "California Wild Fire" as it's heard a lot more often, but my point remains.

The study came out AFTER he made his claims. He was just spouting off about illegal immigrants causing fires with no back up information and then a study came out later that said it's suspected to happen sometimes maybe.

Also said that some campers had started a fire on accident. And a good portion of fires are started by cigarettes. We should outlaw camping and building fires along with making cigarettes illegal.

But no, 30 fires over 4 years that were all suspected but never shown to be done by immigrants enforces a call on stricter border control.

What about Mitt Romney browning himself up to try to appeal to Latino's? That shit's cool. Oh no wait, i'm totally sure he just happened to want to get a tan right before his speech despite never appearing to ever having had one before.
_________________

Did no one read/watch about the whole 47% thing with Romney?
^This is seriously Fucked Up.

How about making medicare a voucher program so my grandpa cant afford medicine cause he's at the mercy of insurance companies? Smart move, gonna vote for him, amirite?
source: http://www.politifact.com/truth-o-meter/statements/2012/oct/03/barack-obama/obama-says-romney-wants-turn-medicare-voucher-prog/

UPDATE: Oh my bad, Romney changed his plan again on the debate last night...
"He has proposed making the Bush tax cuts permanent for all income levels -- then cutting all rates by an additional 20 percent. He would also repeal the alternative minimum tax and permanently repeal the estate tax."

But hey just ignore that shit, Romney is just like every normal American! He pays taxes on his accounts! Wait whats that? bank account in the cayman islands? He's not paying for those? Well lets just ignore that and move on shall we?
"“A guy with a tax account in the Cayman Islands is attacking other people for not wanting to pay income tax?”"
source: www.latimes.com/news/politics/la-pn-bill-clinton-romney-taxes-debt-20121003,0,6581196.story

Well say all the shit you want on Romney, but his VP candidate is top notch just look at this quote...
"Seventy percent of Americans want the American dream. They believe in the American idea. Only 30 percent want the welfare state," Ryan said. "Before too long, we could become a society where the net majority of Americans are takers, not makers."
YEAH! Fuck those 30% of Americans! They all WANT to be poor its their CHOICE. They most definitely want that over being well off im sure.
souce: http://www.huffingtonpost.com/2012/10/02/paul-ryan-30-percent-welfare-state_n_1933730.html

Did i mention he called the Telsa Motors a loser?
source: http://www.wired.com/threatlevel/2012/10/romney-tesla-loser/

Im an independent, but im definitely voting for Obama this year.