Now Zaki.... is your entire knowledge of tanks based on how they are portrayed in videogames?

First off speed has nothing to do with running stuff over, NVM the fact that almost any tank since WWII has had the ability to drive at least 30 MPH... I believe that the Abrams runs around at around 60 MPH.... and can drive THROUGH concrete walls...

a crowd of zombies would offer about as much resistance to an abrams as a sheet of newspaper offers to a person... it also has a big gun, and several smaller guns... strap a few explosives to the top to pop whenever you want to get out of the thing, and you are dandy

the M1A1 Abrams has a speed limiter on it keeping it from going over 40mph. It has a jet engine for godsakes.

I honestly think it should be a bannable offense to say this.

Shows the Abrams in action. You don't see it go fast until the end, but some nice clips of it in action...
And the slow-motion imagery of the gun firing is.... *inhales*


Shows the Assault Breacher Vehicle in action. It's as fast and maneuverable as the Abrams, but I'd rather be in one of these than an Abrams when the Zombies come. And before you point out that the driver is exposed, I'm going to save you the embarrassment of being the village idiot (again) and point out that the driver DOESN'T need to be exposed, the crew can drive the thing entirely from the inside, the MG is remote aimed, and the whole vehicle is entirely capable of being driven by remote. 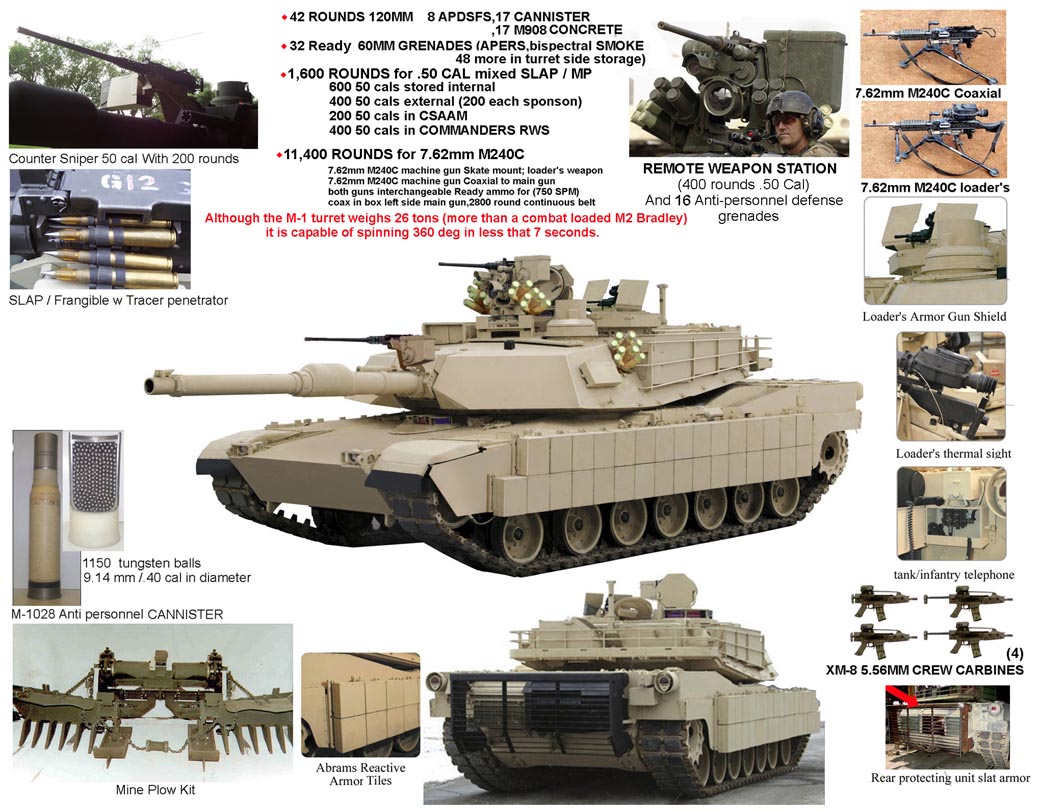 See that canister of tungsten balls? That's for clearing infantry off other tanks, or killing infantry en masse.

... I meant in an urban locale, would a tank drive 60 mph and ram through anything in its way.

And the main gun's sound will probably attract more zombies that it will kill, seeing that tanks aren't made to fend of hundreds of zombies surrounding it entirely.

And if not surrounding it, aiming and shooting at moving targets from all directions while driving 60 mph and ramming through walls are stand in the way.

The only useful weapon on it would be the machine gun on top, and even that cannot defend against being having zombies surrounding and then running at 11 mph at barely moving target.

And I still see problems like how to getting source of oil, refining it, and transporting to an army base miles away would be easy when most of the world has been overtaken by zombies.

Zaki90 wrote:... I meant in an urban locale, would a tank drive 60 mph and ram through anything in its way.

Yes? I mean, it's not like the things it can hurt are innocent.

Zaki90 wrote:And the main gun's sound will probably attract more zombies that it will kill, seeing that tanks aren't made to fend of hundreds of zombies surrounding it entirely.

Zaki90 wrote:And if not surrounding it, aiming and shooting at moving targets from all directions while driving 60 mph and ramming through walls are stand in the way.

Sure, why not? I mean, they have a crew and aren't really being threatened.

Zaki90 wrote:The only useful weapon on it would be the machine gun on top, and even that cannot defend against being having zombies surrounding and then running at 11 mph at barely moving target.

Zaki90 wrote:And I still see problems like how to getting source of oil, refining it, and transporting to an army base miles away would be easy when most of the world has been overtaken by zombies.

And how did the world get taken over by zombies?

New conversation. How would L4D zombies do in the modern world? I imagine they would be far more succesful, if the infection was able to get into the Armed Forces, or if we take into account how it is/can be air born.

L4D zombies still really can't take on a tank. and once its understood the virus is airborne gasmasks will become standard.

Zaki90 wrote:And the main gun's sound will probably attract more zombies that it will kill, seeing that tanks aren't made to fend of hundreds of zombies surrounding it entirely.

The M1A1 actually has anti-aircraft rounds that behave much like a giant shotgun...its perfect for killing zombies. the HEAP rounds wouldn't be used on zombies, but could be used to bring a building down to block a path, or just the zombies locale watering hole.

Prototype had tanks and zombies.

Only problem with tanks is oil and ammo.


Haliburton/KBR is a contractor that supplies the military, and is also an oil company. They use third world workers. Workers get infected, supervisors get infected, big brass gets infected... and then THEY carry it to those on the bases they supply, royally screwing the military.

What I think many of you people miss this fact here: If the US were to come under "attack" from zombies, we have a lot of oil ourselves. We can also look at the fact that there are plenty of gas stations around that have both gas and desiel as an option. Plus, I doubt we have no or little amounts of fuel at military bases and the actions to secure more would be undertaken if need be.

Also, why the fucking hell has no one even mentioned the Air Force as far as I can see? I don't remember flying zombies nor do I remember Aircraft experiencing extremely difficult attempts at killing something.......that typically is out in the open.....cannot reach or harm said aircraft.......and will be killed or essentially killed by almost any type or amount of payload dropped on them.

To tanks now, specifically the Abrams. Going along with NT's points, I'd like to introduce something to you.

Attachments: A Transparent Armor Gun Shield and a thermal sight system are added to the loader's top-mounted M240B 7.62 mm machine gun, and a Kongsberg Gruppen Remote Weapon Turret carrying a .50 caliber machine gun (similar to that used on the Stryker) is in place of the tank commander's original .50 caliber machine gun mount, wherein the commander had to expose himself to fire the weapon manually. An exterior telephone allows supporting infantry to communicate with the tank commander.

The TUSK system is a field-installable kit that allows tanks to be upgraded without needing to be recalled to a maintenance depot.

So as one can see, the crew of a tank could have these installed, in-field or anywhere, and could operate against zombies without ever exposing one's self to a risk.

Let's also look at the fact that soldiers do not fight alone, nor are tanks sent out on fuck-fuck missions with no support. The military fights together, develops strategies and perform real-time tactics on the battlefield, in support of each other, and have a focused, concentrated effort in trying to accomplish their missions.

In the case of a zombie infection, appropriate equipment would be handed out, intelligence would be gathered, the CDC would be protected at what would almost certianly be all costs, and martial law would be delcared if it got to that point.

All in all, the US military could handle a zombie infection.

Tanks would be good anti-zombie vehicles not for the canon or even the MGs, but just the hatch and armor. No hollywood zombie is going to be able to get in one of those suckers without the secret password.

Sure, a lack of fuel is a problem but that can be said about all vehicles. This is why Canada is a perfect place to go in case of zombies

in a zombie invasion, id like to own or be on a hover craft...and have any type of gun...

As per the zombies walking...

In "The Walking Dead", it shows that infection revives only the brain stem, which is needed for the most basic functions and instinct.

The brainstem includes all of the following parts:

The Medulla Oblongata, the lower section of the brain stem regulates the most basic functions, like breathing, the heart, and blood pressure.

The Pons, the structure above the Medulla, controls swallowing, hearing, taste, and posture.

The Midbrain, this structure relays all information in and out of the brain.

The Diencephalon, which is made of many parts, while some are not in the brain stem, the following are:

The Thalamus , which houses auditory, somatic, visceral, gustatory and visual systems, but its major role lies in motor skills.

The hypothalamus, which controls body temperature, hunger, and thirst.


All of which, combined together, should be able to support walking, hunger, hearing, touch, taste, and sight.

Shooting a zombie in the head will kill them because the brain stem is probably going to lose blood or have a chunk missing out of it.

Walking dead zombies are also Shamblers... which we have already decided would be easy to kill en masse

how about Dead Snow zombies? can we do a zombie invasion scenario with them?

well... dead snow zombies are basically unkillable nazis who are as smart as regular people

they would kill us all