Angatar wrote:Apparently my library has no good books in it, and they need to get them from other libraries.

and I found out today that my sister managed to get me a $26 fine on my card...

Angatar wrote:Apparently my library has no good books in it, and they need to get them from other libraries.

and I found out today that my sister managed to get me a $26 fine on my card...

Thats NOTHING, my sister racked up 124 dollars once before. They sent a letter that they were going to sue if we didn't pay it soon

Because I read Angels & Demons about a year ago, and it's a long ass (also great) book, that I don't feel like taking the time to read again so soon.

I could barely get through The Da Vinci Code after reading Angels & Demons.Dont get me wrong, The Da Vinci code is a good read, but I thought it was a depressing sequel.

Nawww that costs to much

Or, you know, go to the library.

Only squares go to the library.

Because you know... triangles cant fit through the doors!

I really wanted to read Dune.

You could still read Dune. I'm still gonna read Suburban Book of the Dead while we're reading this.

oh... everybody is supposed to read the book?


cause i've read everything except time travelers wife on that list

I'm cancelling my starship troopers vote an going to dune.

When does the voting end?

When does the voting end?

By the way, i just picked up Starship Troopers.

I just had an idea; how about for each month we do a different genra (sp)?
For example, this month was clearly Sci-Fi. Maybe next month could be mystery or something. Just a thought.

So when we do have to get the book by ? I'l probably be able to get it in a few days.

I've wanted to buy it, but I refuse to buy classics with stupid covers... 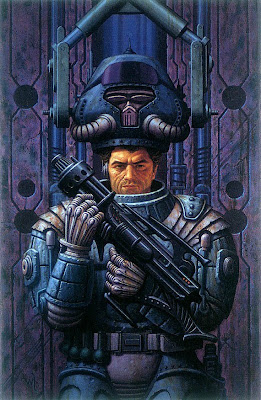 the one I read was a re-print after the movie...
so it had those troopers on it

I finally found out what was wrong with the movie.

The director, who found the book "Depressing", has also directed some other golden nuggets.
Showgirls, which commonly makes it onto lists of "Worst movies to ever come out of Hollywood".
Total Recall... The less said about that, the better!
And "Hollow Man"... Weird, forgettable, yadda yadda yadda.

He grew up near a military base that had V1 and V2 launchers, so some allied bombs must have screwed him up really bad.

I can't seem to find Starship Troopers anywhere. It's not in my local bookstore, and it is a big fucking bookstore. If it's not there I can't see it being anywhere. I might just read a different book and the next book we vote on I will read.